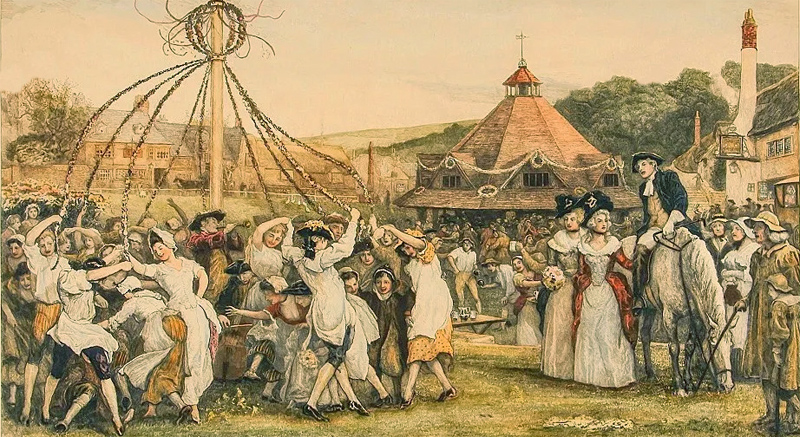 In the Spring of 1343 the good hobbits of North Farthing in the Shire were looking forward to a day of festivities. The first of the month being not merely a market day but a celebration of the green, growing season, the occasion of a quarterly Fair and for enjoyment of lively dances and feasting in honour of Vána, the Lady of Flowers. Mostly the feasting, of course. There being nothing more dear to a sensible hobbit than ensuring that any remaining winter stores are used up properly in the company of good friends, old and new. In the town of Kings Worthy this day began, as usual, very early under pale starlight. The womenfolk, led by young lasses, silently carried candles and baskets of flowers around the town and up into nearby hills to decorate the wells and springs. At the end, just as dawn broke, they sang up the sun with the lovely traditional song ‘Anai arra’. A few hobbit lads loitered in the hope of catching a maidenly eye but were ignored. The older and wiser menfolk instead ensured that a hearty breakfast was awaiting the women’s return.

Breakfast in the Noakes’ town smial proved to be especially noisy and raucous as everyone adjusted to the stay of country cousins; both the Dumblebee Noakes (who were expected) and the Wilberforce branch (who weren’t). Indeed Goodwife Saffy Wilberforce in the fishmongers across town, was ready to take offence. “And wot’s wrong with our place, I want ter know?” she indignantly demanded of her harassed hubby over the kedgeree. Gaffer Wilberforce shrugged it off as just one less mouth to feed. Elsewhere town gossip over breakfast was mostly on the kerfuffle between Miss Hazel Emmett and Chad Diggleby who were due to get married next month, surely it cannot have anything to do with young master Mungo Noakes? As breakfasts were hurriedly cleared away, sisters and female cousins started to heat water and haul out bathtubs and basins for what might once long ago have been a ritual cleanse — but had long since degenerated into an excuse for a spa session; very soapy, bubbly and boisterous. All males were shooed out to go set up the fair.

The fairgrounds and livestock market were laid out along the marketplace and down to the river meadow by long tradition, so most locals knew what they were about. The three sheriffs and town counsellors supervised anyway. Young lads were set to putting out endless trestle tables, benches and canvas flies and were intrigued to discover that many more Dwarven traders were setting up this year amongst the locals — far more than the normal two or three subdued tinkers. There’s an unusual energy buzzing around their wagons even if some of the younger ones look less than pleased. Young Edgar Arkwright cheered everyone along with a lively ditty; soon everything was readied and the traders looked set to open for business… but all the hobbits disappeared again to go home for Second Breakfast. They soon reappeared however, keen to enjoy the spring sunshine and see what was on offer. As well as the dwarves attending there was also Goodman Billy Banks, an archer hobbit from Bree and there were some Big Folk at the fair too: Trapper Targ as usual from the northern wilds, Mister Leásumg “call me Lammy” Spiel, a toymaker from near Bree, and the hopelessly lost family of Olaf Lange, a fine fabrics and dye merchant from the far south.

But it was the wide array of dwarven-made goods which caught the attention of most hobbits. The morning turned into an extended shopping trip as many folk took advantage of the bargain prices and stock clearance. It was at this happy occasion that many significant pairings began: Gorboduc Shelltoe and Primula Dibbs brought smoking pipes together, Halfred Hackenbottom stole Marigold Took away from her duties at the tavern, Falco Wilberforce and Rowan Noakes made a good show of meeting for the first time since childhood, Mungo Noakes ignored the first of several rebuffs by Lily Baxter, and Edgar Arkwright discovered that Bella Noakes was a good chess player to his delight. Over elevenses Marroc Noakes entertained the marketplace crowd with an excellent rendition of a traditional ballad and was joined by Begonia Snugden, harmonising to great effect. Less happily, Isenbold Hackenbottom met Dahlia Clutterbuck, a pairing which petered out in mutual disappointment later that same day.

Further shopping for trinkets and favours and useful items followed, and these fine young hobbits learned that this large dwarven contingent was but one group of families in a whole tribe emigrating east to return to their homeland beyond the Misty Mountains. Apparently, some sort of quest thing resulted in a dragon being killed and now the dwarves have a new King Under the Mountain. They were leaving, never to return. For the first time North Farthing heard news that a famous hobbit was involved, although the idea that it might be Squire Baggins from Hobbiton was rather implausible. Squire Baggins being mostly known thereabouts as turning up inconveniently Not Dead Yet during his estate auction last summer. Whatever further questions the hobbits may have had was interrupted by noisy, obnoxious behaviour by the gang of Oatbarton Oafs hassling the lasses nearby. Isenbold Hackenbottom warned them off with blithe unconcern for his own safety, and this awed them enough that they were cowed and slunk off. About this time the hobbits started to notice some rather dodgy ‘magic toys’ circulating amongst the children. Their mild concern was overtaken by the more serious business of taking luncheon with their new ladies. Some opted for a fine meal at the many taverns in town, although a meadow picnic featuring the finest Hackenbottom cheeses and cider was also popular.

After lunch it was time for traditional contests and shows at the river meadow fairground. It all started, as is traditional, with a lively Maypole dance designed for shenanigans. Of all the lads only Edgar and Falco completed the entire set without mistakes or being sabotaged. Marroc tripped but managed to catch (or be caught by) Begonia in a manner which would have been deemed absolutely scandalous in less relaxed circumstances. He deemed it a win. Keen to display themselves in the best possible light none of the hobbit lads opted to participate the dales race, nor the wrasslin and stavin matches. They all entered the archery contest with Falco excelling (to his own surprise) and Isenbold a good second tier. A messy First Aid competition allowed Halfred to make a good showing, impressing the formidable Vanessa Brockhouse whose own equipment unaccountably broke. The highly prestigious Riddle contest came next on the main stage. Halfred and Falco dropped out of the running early on, although Gorboduc squeezed through to later rounds only with a little luck. Edgar and Gorboduc were eliminated in the following rounds but intriguingly the Noakes cousins sailed through. Marroc and Mungo faced each other in the finals and produced a fine display of kennings, to the crowd’s delight. Marroc graciously conceded to Mungo.

More shenanigans were inevitable during the games of Blind Man’s Buff; the delight of the lasses as it’s the lads who had to be blindfolded and pushed about until they’d caught and correctly guessed the name of their captive. Edgar managed to introduce himself to the tolerant Jasmine Dewfoot in this way, but Marroc contrived to become thoroughly entangled with Begonia in a manner which was deeply scandalous even under those circumstances. Mungo managed to bounce off Angelica and ‘accidentally’ caught Lily Baxter instead of Primrose Nortook, whereupon he took advantage of a fast-approaching storm cloud to escort her away to shelter in the cosy snug of the Willow Lords Arms. A short, icy squall blew in from the north and everyone ran for cover. Afterwards it was discovered that a lot of the fairground had blown down or been damaged. Gorboduc and Primula set about organising the clean-up crews with good humour. Marroc and Begonia attempted to find a private nook but were thwarted at every turn. Falco bought a beautiful ring from Noi the dwarf then visited Rowan’s parents to obtain formal permission to court her. Halfred continued twaggin’ with Marigold Clayhanger, although by now her family were pretty irate at her continued absence. Lily Baxter, much to her surprise, found the hyperactive and overly persistent Mungo rather interesting. All this was overshadowed by news that Falco had proposed to Rowan — and been accepted!

Teatime was a merry affair as lanterns were lit all around the marketplace and families brought out chairs and benches for the rescheduled entertainment. Edgar Arkwright’s careful introduction of Bella to his musical sisters and cousins went immediately awry when it became apparent that she was tone deaf. Halfred attempted to make a Serious Business Proposition to Marigold but she was deeply disappointed — her romantic soul yearned for adventure. Goodman Heathertoes called in on everyone in search of his daughter ’Gelica who had not been seen since just before the storm. More dwarves drifted into the marketplace and Isenbold was sure that some of them might be female. Children ran hither and yon waving sparklers while interested spectators called helpful and unwonted advice to those organising the spit roasts. Eventually all was deemed ready for the song contest which had to feature an original composition. There were many fine entries that year but by far the best hobbit song came from young Master Edgar Arkwright in his third and best performance of the day. There were loud cheers and in any other year he would have been the outright winner, but not on this day. The townsfolk were amazed to watch an entire dwarven choir assemble onstage. In astonishingly resonant voices they treated their audience to their new Saga of the Battle of the Five Armies. It was stunning and epic and explained much about Squire Baggins’ long absence. Afterwards there was a long, stunned pause before the assembled hobbits broke into thunderous applause. The dwarves looked mighty pleased.

Hobbits being hobbits, attention then turned to the serious business of Dinnertime. The spit roasts were finally declared ready and served to all around. Marroc and Begonia at last managed to sneak away to somewhere private. Folk gossiped happily until the fireworks started which was the signal for a general migration down towards the mill pond for a better view. Belatedly it occurred to Halfred and Goboduc that if the sparklers were provided by toymaker Mr Lammy, then the main firework display was most likely supplied by him also. They did not deem him diligent enough to have care for the bulk properties of black powder and at once began to warn the crowd to stay away and retreat to the safety of the marketplace. Not a moment too soon: within the minute its flames gusted out of control and detonated the remaining firework display floating atop their millpond. What might have been a disastrous direct blast turned instead into a merely undignified deluge of pond mud and weed upon the occupants of the town. Festivities came to a sudden, soggy end. Fortunately no-one was hurt and Mr ‘call me Lammy’ Spiel drove off at speed before anyone thought to detain him. The good hobbits of Kings Worthy, once they got over their shock and extra laundry, declared themselves pleased with their newly improved mill pond. The spring festival was a great success after all.