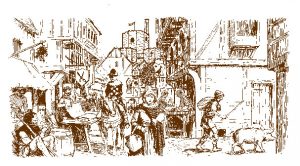 Linrodeth was the second-largest port and the capital of the Kingdom of Athion. The Kingdom collapsed upon the murder in Midsummer 147 of the last King Edmund, whereupon civil war broke out between the backers of his two eldest sons, Edward and Kieran. After an uneasy year in Springtide 148 Linrodeth was eventually invaded and taken by the mercenary forces of Princess Selina of Kerun, wife of King Edmund’s youngest son, Edwin.
In the Summer of 151 the vast Battle of the Three Roads was fought to the south of the city between the armies of Kieran and Edward, with the forces of Princess Selina overlooking the field. Edward was killed, but Kieran was then forced to recognise Selina’s right to rule an independent Principality of Linrodeth. Like her predecessors, Selina permits Linrodeth its ‘democracy’ for a suitable tax, but has taken back control of the city guard and, with her foreign courtiers, watches political events closely from The Citadel.
Linrodeth’s wealth is based upon its vigorous Trade Guilds, which over the years created a unusually literate and articulate citizenry of craftsmen and shopkeepers. These Guilds men and women are permitted a limited form of self-rule, in return for a suitable tax, under the watchful scrutiny of the nearby Citadel.

The port and docks below the bridge over the River Ishtan are the lifeblood of the city. Since the start of the civil war, many of Linrodeth’s overland routes to other cities have been made hazardous by fighting, or are entirely blocked. Increasingly, the city is coming to rely on its seafaring traders and merchant navy to maintain its prosperity. Since the invasion, Keruniun ships have become frequent visitors from the south. During 151, Linrodeth started investing in a new fleet of consortium ships, financed jointly by Princess Selina, The Witanmoot, the Linrodeth Esprayennan Temple and individual merchant families.

For administrative purposes, the city is divided into 21 wards. At Midwinter the householders of each ward elect 12 councillors and an Alderman to represent their ward on the city council. These representatives must be guildmembers as well as householders and, because politics is an expensive and time-consuming business, most are actively sponsored by their guilds. The city guilds are granted a monopoly on their trade, and many citizens are members of one. The city has many popular markets as well as the shops.
Once elected the ward representatives take their place on the Court of Common Council which sits in the Witanmoot at the heart of the city. Here they are drawn into the complex and chaotic political arena, riven as it is with factionalism, feuding, intrigue, bribery and occasional reforms. To everyone’s surprise, most problems get sorted out eventually. Interested citizens can catch up on the latest news about their councillors in The lastest issue of The Chronicle.
Linrodeth is blessed with several major temples, and many countless minor cults. The major religions include: Hahn (law and justice), Torus (healing), Daleth (earth and growth), Esprayenna (sea and self-reliance) and Brynette (fire and construction). Of these religions, the Wellhouses of Daleth and the Smithies of Brynette are most likely to be found in rural villages. In recent years a new order has grown which claims all these gods as a single pantheon under the unification of the Holy Son Resh. This new religion, strong in the south of the kingdom, has not yet gained hold in Linrodeth. It is said to be the cause of the civil war.

Also resident in the city are the students of the Bards’ College. The college is a squat, rambling structure in the easternmost corner of the city, which is rumoured to pre-date the city itself. It produces very few bards, but many musicians, poets and scholars of all types. Their entertainments, and occasional serious work, are the source of much vexation for their neighbours.
On the north shore of the River Ishtan are the civilian shipbuilding yards and stinking tanneries. To the west, 3 miles further down the estuary, lies the military harbour of Kingsport where the ex-Kerunian Navy and the new Consortium Fleet is based.
Events in the City of Linrodeth are recorded in a monthly newsletter called The Chronicle. You can always find out what is happening from the latest issue of The Chronicle.