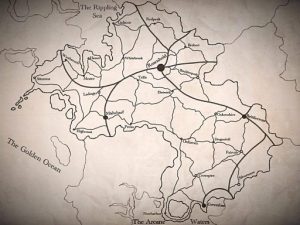 Vaevalon is the central most kingdom on the continent of Keriad, characterised mainly by its diverse people and its status as a political powerhouse. Vaevalon shares borders with six out of the nine mainland kingdoms of Keriad, most importantly being the inland gateway for trading between the eastern and western kingdoms.

Known as Keriad’s Crossroads, most of Vaevalon’s wealth and influence stems from the trade that passes through its lands via The Golden Road. However, instead of exploiting such power for warfare or as a means of conquering other nations, King Leonidus and his ancestors have always sought to use their influence for peaceful means, even brokering a previously thought impossible peace with the northern nation of Qoris.

Within Vaevalon itself there are many different regions each governed by Lords or Ladies of noble houses. The most powerful of these nobles are the Barons/Baronesses who reside in the largest cities and are responsible for multiple regions and the nobility that govern them. These Barons and Baronesses form key influential figures within the king’s personal council as well as holding great sway over the decisions made whenever the nobility converge for the Exalted Assembly.