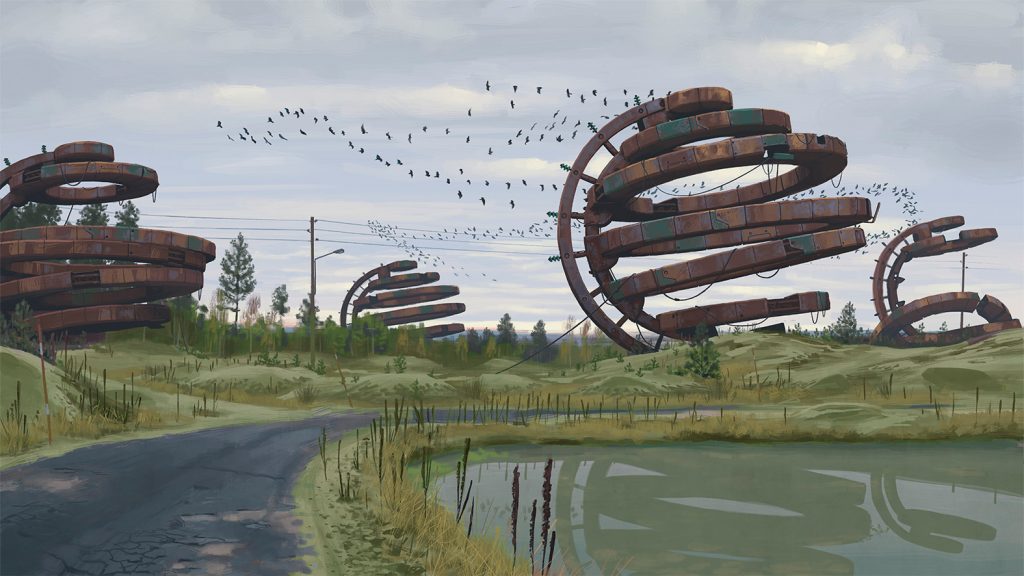 Dedcot’s rise from an obscure farming village began in Victorian times when the Great Western Railway, engineered by Isambard Kingdom Brunel, came through and placed a station there. This was followed a generation later by the smaller LBS Railway running North–South and making use of the same station and goods yard.  While Dedcot is usually thought of as a railway town it contains little in the way of engineering heritage, as Brunel placed those works in the town of Swindon located 20 miles further West. Dedcot’s rapid expansion started instead with World War I and the arrival of the Ordnance Depot along with a large Army garrison sent to guard it and its vital railway junction linking the major ports of London to Bristol and Southampton to Liverpool. After the war, the army remained and soon became the area’s largest employer. The arrival of an RAF station on the downs to the south also added to Dedcot’s importance and by the start of World War II it was all set to become a major military hub. However, events took an unexpected turn.

Nuclear power was kick-started from theory into sudden reality by World War Two.  Following the Quebec Agreement, Churchill agreed to divert funds into a new a research laboratory to further the use of nuclear fission for both military purposes and to generate energy. The criteria for selection involved finding somewhere remote with a good water supply, but within reach of good transport links and a university with a nuclear physics laboratory. This effectively limited the choice to the areas around Oxford or Cambridge. It had been decided that an RAF airfield would be chosen, the aircraft hangars being ideal to house the large atomic structures that would need to be built. Although Cambridge University had the better nuclear physics facility, no sane engineers were prepared to build in the Fens and the RAF refused to abandon any of its vital eastern airfields during the war — so RAF Harwell, sixteen miles south of Oxford, it was. The first site of the UK’s Atomic Energy Authority was formed, universally mispronounced as ‘ukulele’.  Under the jumble of Nissan huts, hangars and brick barracks on site the boffins rapidly built a modest reactor and a prototype particle accelerator a mere half mile in diameter.

At the end of the war nuclear collaboration between the USA and UK, never very harmonious, broke down and the Quebec Agreement was terminated to mutual relief. The new Prime Minister Clement Attlee was given a choice; to use the scarce amount of available steel to repair bomb-damaged Houses of Parliament, or to expand nuclear research at Harwell so Britain could join the nuclear powers. The prime minister chose Harwell and with renewed investment Harwell became the obvious location for the establishment of the European Organization for Nuclear Research a few years later.  Top scientists from all over Western Europe relocated to Dedcot to take part in one of the most ambitious scientific projects of the new era: a massive new accelerator 12km in diameter was constructed deep in the bedrock in the hope of finding new ways to generate cheap energy. It did not take long for locals to come up with a new name for the facility: The Loop. The three massive cooling towers of Dedcot are a landmark visible from miles away. The purpose of the towers is to vent heat created by the huge amount of energy released by the Gravitron, the heart of the Loop that powers the entire particle accelerator deep underground.

Meanwhile, the USA government began work on its own, militarised application of nuclear power. The Soviet Union and Eastern Europe concentrated on development of the so-called magnetrine effect, discovered by Russian scientists during the war. In Japan the new company Iwasaka pioneered the self-balancing (or Robot) machine in laboratories in Osaka.  For a while it appeared that the Russians were doing best in the post-war years as their floating tech gave birth to majestic gauss freighters hauling goods across the world. That changed abruptly in the mid-1950s when it became apparent that the massive magnetic fields which generated their lift had disastrous long-term effects on nervous systems and electronics. Since then gauss vehicles have been confined to long distance transport corridors across Siberia, Canada, the Sahara and Trans-Pacific routes. What the various Native Peoples think of this arrangement is not recorded.  There are, of course, still exceptions in the shape of militarised vehicles. The 1950s also saw the arrival of the first defecting scientists to escape the Eastern Bloc. Many came to Dedcot where their work had a big impact on the capabilities of the Loop. 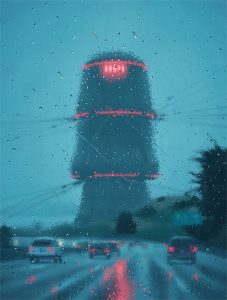 Dedcot Loop delivered on its target of providing electricity ‘too cheap to be worth metering’ to households. Harold Wilson became prime minister on a promise of delivering the ‘white heat of technology’ for a better, socially responsible Britain and its allies (i.e., Western Europe). With yet more funding flowing in from all over the continent, Dedcot entered what is still known as the ‘Golden Age’ of innovation and the research facilities overflowed Harwell campus. A third Loop was constructed, rumoured to be a massive 30km in diameter, and the southern section of the old LBS line was shut down to accommodate it. As its cooling vents were too extensive to be placed near the ancient city of Oxford, they were designed instead into the side of the elevated sections of the M4 motorway north of Newbury. Iwasaka opened a research branch at nearby Culham, and exchange scientists from the American West Coast Loop were a common sight. At its height UKAEA Harwell employed over 7,000 people.

All of this came crashing to a halt in 1973 when Britain unexpectedly voted against joining the European Common Market in a referendum. The European organisation withdrew to found a new facility (CERN/later CERES) on the Swiss/French border, commercial investment vanished almost overnight and the prestigious International School closed its doors for good. Many experiments were simply abandoned where they lay and large engineering projects were left to rust mid-construction. A long period of recession gripped all of Britain throughout the 1970s, and was keenly felt in the Dedcot area. UKAEA Harwell and the cooling towers remain active and guarded, albeit on a much smaller scale. Local rumour has it that the nature of experiments has changed over the past decade. More US delegations, some of them uniformed, have visited the facility, fuelling speculation that science worked on at the Loop might have a more military focus.

All of this ancient history, of course, matters not a jot to the local kids. Getting through secondary school at Dedcot is tricky and unforgiving. Adults are clueless. The future is full of possibilities and the world rife with possible adventure — at least those parts within reach of their BMX bikes.