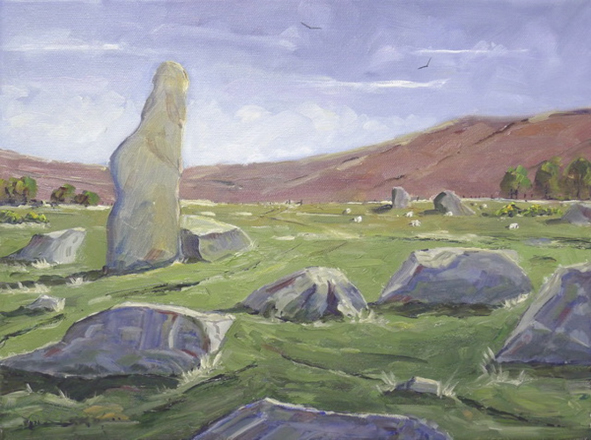 As they stood on the Preseli hills, at dusk, sometime in the long-distant neolithic past, our gang of kids surveyed their surroundings and decided that ‘bleak’ didn’t begin to cover their prospects. It was cold, mizzling, getting dark and offered little prospect of making a shelter on the moor. They were still dressed in school uniform and wearing their class rucksacks so they were not without some survival tools, but eventually decided that gifts of 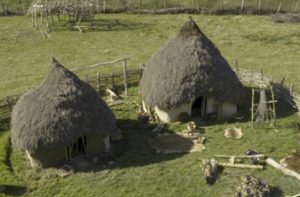 chocolatey snacks might win them hospitality at the round huts in the valley below. Bickering on their way down, the kids were easy targets for the tribe’s patrollers on guard duty that night. Fortunately, none of the kids made the slightest move of resistance so the teenage spearmen merely prodded them towards the huts for their elders to deal with. One of them had a rather interesting spear tip made from a shard of circuit board. The kids were happy to get inside the main hut and warm up. In dim light from a central fireplace it could be seen that there were less than a dozen full adults, but lots of teenage warriors keen to stab them plus an unknown number of infants peering out from the shadows.

Communication began with a swopping of tribal names; the resident Carriks (the family of the Stones) and the visiting Dedcots (the itinerant traders). Then came an exchange of more chocolate for some hot herbal tea, and with those rituals of hospitality satisfied they moved onto serious trading. 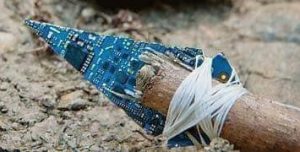 The Carriks brought out a display of  shaped bluestones and finished hides. An initial trade of wire leads for a circuit board spear failed. Another chocolate bar and a pristine set of collectable cards also failed to win any tech. However Ash’s metal fishhook plus one of Tommy’s leads did buy the spearhead, much to the disgruntlement of its previous owner. Tommy rummaged past his maths homework for three paperclips and bonus pencil stub which they traded for the information that the spearhead had come from Stonehenge somehow.

Pete, quietly observing from near the door, noticed that ‘Grandma’ was slightly surprised to be packing away the local stone shards but content to leave the menfolk to trade for hunting and fishing stuff. He tried a trade of his plastic water bottle for a shard but that didn’t quite work, however Ash noticed and offered a safety pin instead. For the price of three safety pins they were allowed to choose one bluestone shard; for some reason Ash was strongly drawn towards one particular stone. Grandma gave a nod of approval just as a horn somewhere outside sounded the alarm. 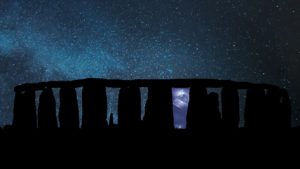 Everyone ran outside and the kids joined their hosts as they gathered at Stonehenge where, in dark of deep night, one of the trilithon gaps was opening as a portal. It was also night-time through the opening but the other side was illuminated by many lights of a large town with three distinctive cooling towers: Dedcot! The tribe took up defensive positions and the kids, who had finally started to be cautious of convenient portals, hunkered down to watch.

High above the ground, the sky shimmered in silver, and in the moment after there was a silhouette of an enormous machine – an elongated magnetrine cargo ship with glittering search and warning lights. The sky around the ship seemed different, it was in the middle of an intense thunderstorm but a red sunset was also bleeding in. In the storm red sand and hail was whipped up; an impossible mix of two landscapes. The ship slowly fell with a tormented metallic scream. Rows of magnetrine disks tried to adjust to compensate for the absence of the strong magnetic field that kept the ship flying. Lightning bolts hit the ship’s body from the surrounding clouds, the air smelled of ozone, and the ship dropped to the ground where it slammed into the base of the towers. Then, a dull rumble was heard from below and the town seemed to explode in a dazzling brightness. At the same time, the ground shook and several smaller explosions tore along the line of the Loop. It only lasted a minute before everything started to repeat; time appeared to have become stuck in the middle of the explosions. 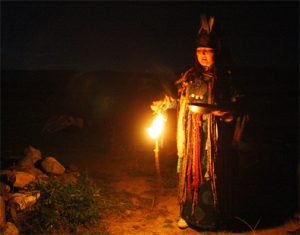 During all this the elders had gone to different points around the stone ring and were leading the tribe in a repetitive chant while drumming on the bluestones. Infuriatingly the tune was actually vaguely familiar to Tommy, although with different words, which in his time is a very ancient winter song about hunting the wren. Very reluctantly he joined in with his Welsh version and Robbie and Andy quickly picked up enough to at least to hum along. Ash noticed that the drumming was creating a resonance in the bluestone megaliths and that the shaman had matched the song to that frequency, so Ash just amplified that particular keynote. Much to the kids’ surprise, although not at all to Ash’s, the ringing stones caused the portal to blur and fade out. Grandma and Ash exchanged a nod of mutual respect. The two tribes intermingled happily on the walk back to the settlement which gave Sean and Tank the opportunity to slip away and establish friendlier relations with some of the female warriors. The other kids were shown back to a guest hut where they puzzled over resonant notes and discovered that Ash’s bluestone shard was in fact a stone chime.

The following morning Kin scanned the horizon with his special lens and learned that they were inside a bubble with the boundary concealed by the mist, but that one section had shimmer where the border appeared to be thin. Pete scouted it out during his morning run but there was nothing obvious to see in the thick mist. 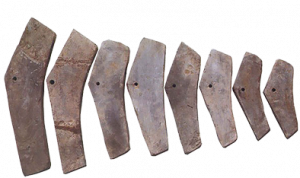 When the whole gang regathered they decided they urgently needed a selection of resonating stone chimes and scrambled to find metal to trade. Tommy challenged the logic of Ash’s shamanism but was overruled, likely because everyone was in a D&D mindset. Over a morning cup of hot tisane Robbie led a very pleasing trade of eight ingots of shiny boxes containing steel geometry instruments in exchange for a further seven stone chimes – a complete octave. They waved goodbye to their hosts and set off for Kin’s border anomaly.

After trying Tommy’s Welsh song and Kin’s miniaturised henge to no avail, Ash got to try out her favourite stone chime whereupon the anomaly started to respond. With some determined amplification the portal finally started to open and revealed a lush tropical riverside. Pete ran straight in. The others were more cautious but came through eventually.

The colourful snakes and crocodiles clued them into the fact that they were in Australia, and a primitive time anchor powered by wind sails hinted at a 1970s installation. The trickle of electricity was not enough to make Gizmo happy but Kin was confident he could improve efficiency substantially with a water turbine. Several kids swarmed up the tree to dismantle the gadget while Sean got a fire going and dug out marshmallows from his pack. As the turbines sped up another bubble started forming up the tree with a human silhouette trying to push its way out. Kin’s final tinker was to link in his stone chime which was enough to shimmer the bubble into transparency and allowed their old maths teacher to fall out.

Mad Mike MacAllister was looking decidedly older, badly injured but still clutching his precious bicycle helmet. The kids patched him up as best they could. While the techs analysed the big sphere and postulated that it was some kind of early time anchor and/or Nellie sphere, others got to work constructing a shelter and Tank won an epic fight to the death with a crocodile in the river. Ash noted that her compass was still circling so they were likely in another bubble. While their crocodile steaks were cooking Mike MacAllister came around. Robbie reassured him and asked some urgent questions. He last saw them some years ago. They catch him up on their travels so far and want to know more about the ship crashing. He explained that their coordinates would take them to a point after Klein-2 switches on, but before the magnetrine ship crashes. The energy released by the crash will be much worse than anyone realises; it will destroy all of time and space. They have to stop it. The helmet, which contains the remnants of Klein-1, will help but he’s in no state to keep going. It’s up to them to save the universe.

Kin examined the helmet and noted that it didn’t have any obvious power source but would give the wearer access to an array of memory chips of future tech. Andy was very much against anyone wearing it. Tommy put it on anyway and was delighted to discover files and schematics of all sorts of things that could be done with a limitless supply of gizmo chips. Meanwhile dense fog began to rise off the river surface which several kids realised might indicate another hostile bubble forming. Tommy was distracted by schematics of his very own tree of knowledge unfolding inside the helmet but it did give him insight into the mathematical relationship between time, space and the Professor’s collection of disco-synth pop music. As an ominously icy-white bubble began to flow down on the gang he fumbled out gizmo and played the major A key from ‘Electric Avenue’ which the rest of the kids frantically amplified on bluestone, bow string and voice. The bubble engulfed them just as it turned from white to grey. 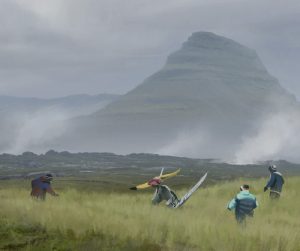 The kids emerged into a barren landscape of crusty, block rock thinly covered with tufts of wiry grass. Low, dark mountains made ragged shapes away in the mist and dense steam from a hot spring rose up from the volcanic bedrock. About 20 meters away a baby pterodactyl stumbled around in the thin grass; aggressive but not coordinated enough to be a threat. The kids instead searched around for anything which might be a machine which stabilised this bubble into an exact place and time. Kin realised that geothermal energy would make an efficient power source. The gang headed for that hot spring but had to stop to rescue Tommy who had fallen down an old volcanic vent. Possibly he should pay attention to more things outside of his helmet, but he still didn’t take it off. Poking around the hot lagoon the kids found and fished out three slippery hi-tech spheres which could just about be secured inside their rucksacks. Tommy engaged enough to reprogram each sphere with the Professor’s 11-space co-ordinates, but without a power source the anchors remained inert. Ash suggested some sort of rip cord like a primitive fire starter and donated her paracord bracelet to the project.  The kids divided themselves into three gung-ho groups around the three time anchors and one by one pulled their starter cords.  The Icelandic lunarscape folded itself around them and, disorientated, they re-emerged inside a vast curved tunnel fizzing with energy: the Loop. 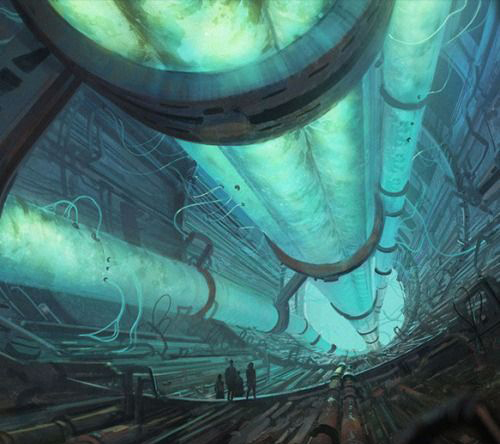