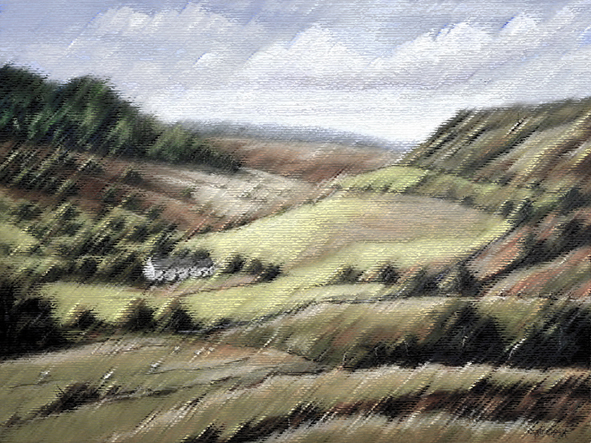 In September 1985 the gang had just settled into a new year of school but plans for a comforting Friday evening of D&D were derailed when Pete discovered that his mum had been intercepting letters from his beloved sponsor, Laura Ashley, and that he was expected at a launch party immediately. 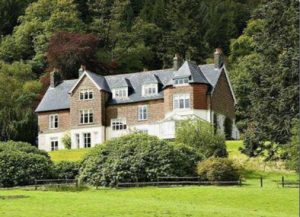 Following arson at the Culham factory, this party was being held at the family estate in mid-Wales. Pete was very keen to set out immediately and Tommy, knowing much more about the Welsh than he would like, reluctantly agreed to accompany him as translator. They eventually arrived in Carno long after dark and learned that the Ashley mansion, Rhydoldog House, was in a valley to the south. The pair set off in the dark but got thoroughly lost. Eventually even Pete gave up and they found shelter in a remote farm with an elderly couple who spoke not a word of English but gave a fine supper and warm feather beds to sink into. 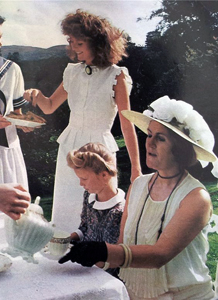 On Saturday the rest of the gang made the train journey west in twos and threes once their weekend chores permitted. In Carno they discovered an annoyed village dealing with the disruption of a large number of visitors. Most of the kids cadged a lift with one of the many delivery vans going up to the big house, however Tank crashed his bike and went back to the village to clean up whereupon he observed even more weirdness amongst the chapel-going villagers. Chaos at Rhydoldog was extensive with technicians ill, fresh food gone off, serving staff missing, fashion clothes mixed up and a vast muddle inside the marquees. Evading security at the perimeter, the kids made themselves useful and were quickly absorbed into the support staff. Even Pete and Tommy, once they had said their goodbyes at Ffarm Hen Garreg, had no trouble following the noise, lights and direction of helicopters into the party. As an actual invitee Pete had no trouble getting in and was immediately given an asymmetric tux to wear, but also managed to blag haute couture dresses for Robbie and Ashley. There were photos to prove it. 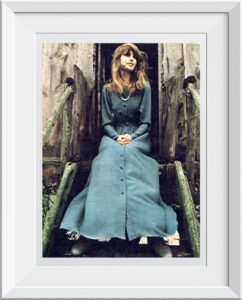 The more technically minded kids by this time had discovered that the entire mess was being blamed on the Bwbach. Tommy was having none of that folk nonsense and immediately deduced that the hostility of the local minister and contaminated bakery bread were more likely trouble. With some persuasion the kids engineered a meeting with their beloved sponsor and alerted Mrs Ashley to the dangers whereupon that formidable lady immediately set out for the village to Sort Things Out. As they were being ushered out of the main house the kids passed framed photos of previous fashion shoots and one of them, from the 1970s by the maxi dress, featured Rose Tucker. If they hadn’t met her in 1965 they’d never have known who it was.

Back out in the marquees the party was well underway by this stage and the male teens, especially Tank, mostly distracted by the presence of so many supermodels. Mr Bernard Ashley opened the main stage with a speech introducing the fashion show and dedicating the charity fundraising “as ever” to Craegfyn Womens Refuge. 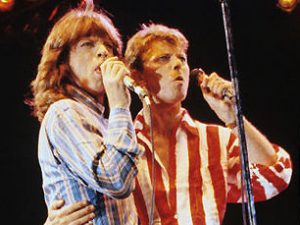 Fashion, champagne and caviar were followed by discos, dancing and live music from Madonna, Chrissie Hynde, UB40 and the ever-cool Eurythmics. Around midnight there was even a memorable duet from David Bowie and Mick Jagger. The kids snuck out early before the scene degenerated beyond PG13 and made their way into the main house. The stealthier types snuck into the study where tidily labelled filing cabinets held personnel archives, but the folder of ‘Tucker, R.’ was almost empty and contained only a note that records were sealed until 2005. 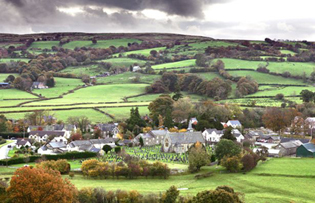 Next morning Pete headed out for his early morning run and noticed that Laura Ashley was also up and working over an early breakfast. She was clearly one of those women who could get by on very few hours of sleep. A short, honest plea for help with his parents’ custody battle led to a promise that she would ‘take care of it’, presumably with company lawyers. The rest of the kids rose later and made their way back to Carno where they found the entire village closed up for Sunday. Strict trading laws ensured that the bakery would not be selling any leftover bara rhyg. Robbie insisted on visiting Craegfyn Refuge up the valley but was blocked from entry by a poker-faced lady who agreed only to accept a message without comment on whether it could be delivered. Tired and emotional, the kids headed back on the long train journey home.

Later that week the newspapers announced the death of Laura Ashley, following an earlier fall at the family home. “Laura Ashley, iconic designer, dead at 60” was the headline of 18th September 1985. A company statement describing it as “a silly domestic accident” was later changed to “a tragic fall down the stairs”.